After the start was postponed four times due to heavy fog preventing the Race Committee from seeing the line, the 33 sailors competing in the 9th Vendée Globe finally set sail from Les Sables-d’Olonne. Ahead lies a 24,296 nautical mile, solo, non-stop, round the world race via three capes without assistance.

Among them is the Principality of Monaco’s official representative, the IMOCA 60 (18.28m) Seaexplorer-Yacht Club de Monaco, a monohull fitted with latest generation foils and skippered by Boris Herrmann. He is the first German skipper to enter this legendary marathon.

“Described by many as the Everest of the Seas, this is an extreme challenge in its purest form: sailors who battle the odds alone, against the elements, and follow their dreams to the end through the sheer force of their courage and self-sacrifice. Another source of pride is the environmental aspect driving this project, in association with my Foundation, by YCM Vice-President Pierre Casiraghi and our skipper Boris Herrmann. They have equipped Seaexplorer-Yacht Club de Monaco with an ocean laboratory, allowing scientists to measure and record scientific parameters. All our very best wishes go out to Boris whose progress we will follow with enthusiasm and passion throughout this epic race,” said HSH Prince Albert II, an accomplished sportsman and President of the Yacht Club de Monaco, who fired the gun for the start of the previous 2016-2017 edition of which he was the godfather.

It is a project initiated by Pierre Casiraghi: “This is the result of years of hard work! We’ve had this goal in our sights for such a long time now. It’s very exciting. I am right behind Boris with all my heart and will be in regular contact with the boat. The whole country is behind him. This race is helping promote the Principality’s influence through sport.”

On Saturday the day before the start, HSH Prince Albert II and Pierre Casiraghi, in compliance with lockdown rules, hosted a conference online for a final chat with Boris before his departure, one that was attended by some 50 Team Malizia supporters, family and friends including Greta Thunberg, and race favourite Alex Thomson. The Sovereign Prince and Pierre had wanted to plan a surprise message of encouragement for their skipper.

A solid race as key objective

This morning, quays that would usually have been packed to the gunnels were eerily quiet, but the excitement was all the more palpable as one by one skippers boarded their boats, like gladiators entering an arena. Due to the health situation, the ambiance for the start of the 9th Vendee Globe was dramatically different, but nothing could dent the morale of  39-year-old Boris Herrmann who is realising a dream: “Since I was 16, I’ve been thinking about the Vendée Globe”. The sailor has a solid track record and has clocked many miles in southern seas, having already circumnavigated the world three times. His fellow competitors are like the event – tough. All share the same desire to finish, as the Vendée is famous for the many obstacles it throws up. The course crosses three oceans (Atlantic, Indian, Pacific) via three capes (Good Hope, Leeuwin and Horn), a prohibited ice zone and complex area of widely varying weather (the Doldrums) to name a few.

With 33 sailors from nine nationalities, including six women, this is a record turnout. “In the last eight editions, only 67 skippers have finished the course out of a total of 116 entrants. It is an incredibly tough event and until that finish line is crossed anything can happen,” says a humble Boris. “I’m keeping in mind the record set by Armel Le Cléac’h at the last edition in 2016-2017 who completed this round the world in 74 days 3 hours 35 minutes and 46 seconds. I have food for 80 days and can eke that out for 100 days without sacrifice”.

While finishing the race is a goal, so is finishing in the top ten which “on paper is achievable. All the many training sessions with competitors has proved to me that the boat can keep up the pace,” concludes the skipper who has been advised up to the start phase by Jean-Yves Bernot and Marcel Van Triest, two of the world’s best route planners. 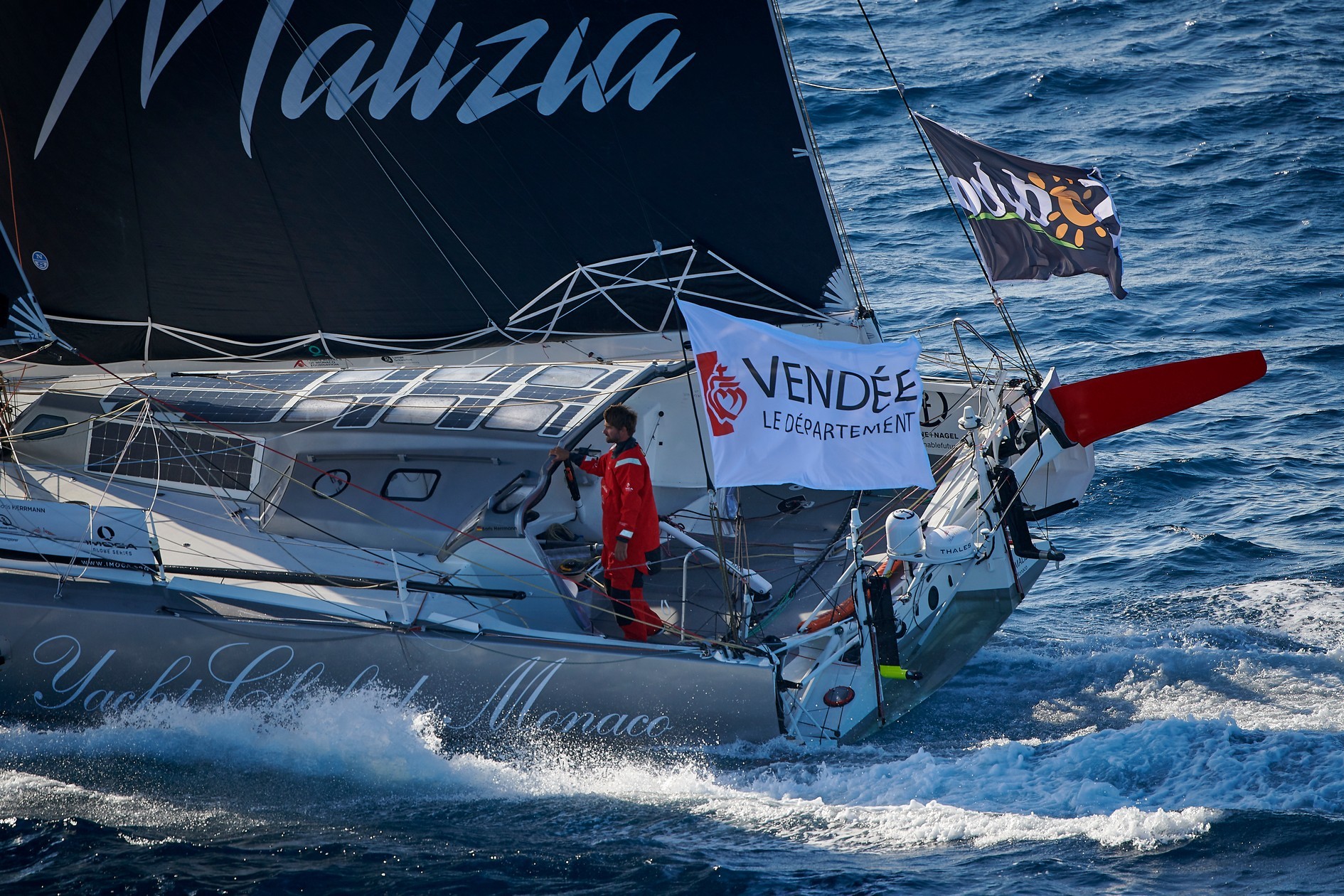 As a man who is passionate about the sea and marine environment,  Boris Herrmann is also a member of UNESCO’s Intergovernmental Oceanographic Commission, a commitment reflected on his boat which has solar panels and hydroelectric generators to avoid using fossil fuels.

Also on board is a fully automated laboratory which will be analysing oceanographic samples 24/7 and transmitting them to scientists working on meteorology programmes at the Max-Planck Institute in Hamburg, GEOMAR in Kiel and IFREMER in Brest. “Wind speed, heel angle, air and water temperatures and salinity, as well as PH and CO2 content in the ocean will be on the Yacht Club de Monaco and Team Malizia websites”.

The name Seaexplorer is a reference to an initiative led by Kuehne + Nagel to measure the impact of CO2 emissions in shipping and work on reducing them. It is a goal that unites all those who love the sea and has mobilised key players in the luxury yacht industry, led by the Yacht Club de Monaco, to create the Superyacht Eco Association (SEA) Index, a benchmark to measure the environmental impact of yachts over 40m. 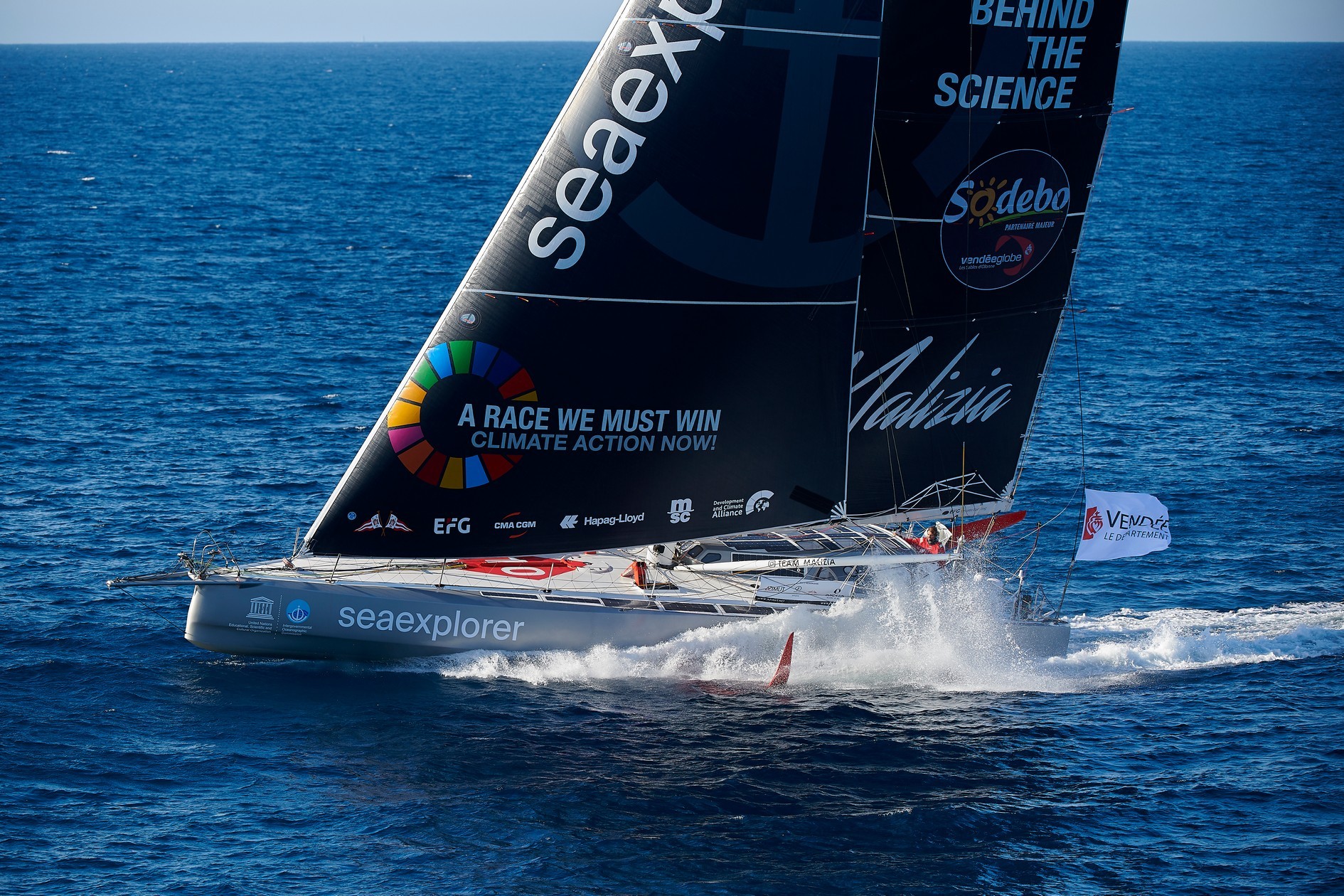 Yacht Club de Monaco’s younger sailors and racers will be able to live the Vendée Globe as it unfolds, as the Club is organising weekly meetings late afternoon every Wednesday. It will be an opportunity to learn more about the weather phenomena that await, find out what life is really like on board an IMOCA and how it’s organised, analyse different strategies, etc. A number of experts in their field are lined up to talk, including sailors Gilles Chiorri and Philippe Monnet.

The Vendée Globe adventure will also be experienced by proxy through a Virtual Regatta that YCM members and youngsters in the Sports Section will participate in, alongside the 120,000 already signed up, including big names in sailing like Loïc Peyron. “In the current situation, it is more important than ever to keep our young people dreaming and promote vocations,” concludes Pierre Casiraghi.

While Louis Burton (Bureau Vallée) incurred a five-hour penalty for crossing the start line first a few seconds to soon, Boris Herrmann (Seaexplorer-Yacht Club de Monaco) quickly entered the top three alongside Thomas Ruyant (LinkedOut) and Maxime Sorel (V and B – Mayenne), sailing at 15 knots with a gennaker up. Competitors will now tackle the Bay of Biscay to Cap Finisterre, a delicate passage on the Atlantic descent which due to strong winds and five-six metre troughs forecast tonight is expected to be difficult to negotiate. As always, it’s the first stage that sets the tempo of the start and sheds light on the tactics each skipper may opt to adopt.