Thursday 3rd December 2020. “The important thing is to finish the race, said the German skipper before the start – a statement that has taken on its full meaning in this fourth week of racing where events and damages have decimated the fleet, most of whom are now grouped in the Roaring Forties.

After the favourite for this 9th Vendee Globe, Alex Thomson (Hugo Boss), was forced to abandon, other competitors have had problems. Kevin Escoffier (PRB), Sébastien Simon (Arkea Paprec) and Samantha Davies (Initiative Cœur) have all suffered damages. In this avalanche of incidents, some skippers are holding their own like Boris Herrmann (Seaexplorer-Yacht Club de Monaco) who this morning passed Cape of Good Hope, the first passage mark of this solo round the world race, without assistance. 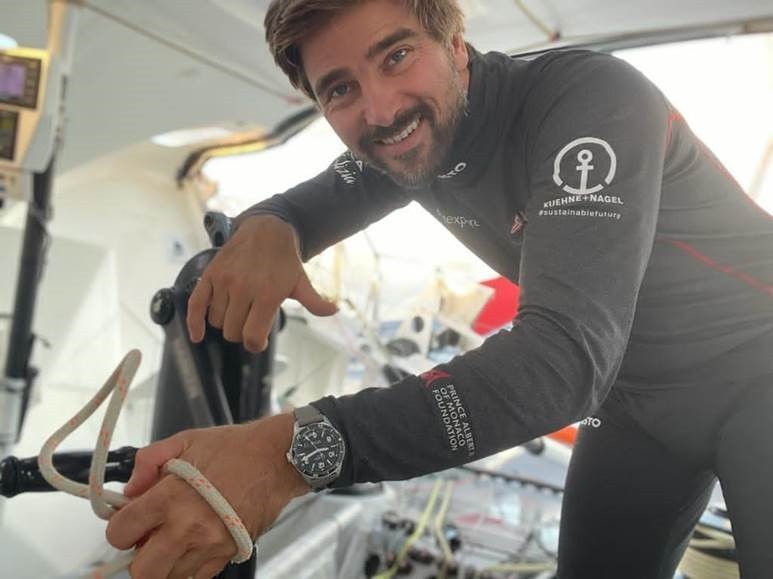 While Charlie Dalin (Apivia) is well in the lead, Boris Herrmann (Seaexplorer-Yacht Club de Monaco) is 7th in a closely packed peloton behind: “Conditions are quite difficult, it’s challenging,” he explained during a live radio session organised by the Yacht Club de Monaco. “I’ve had a problem with my J2 (foresail) so am sailing with a sail that is either too big or a sail that’s too small. I have to wait for a lull before fixing the problem.” He is now sailing due north: “I decide the route depending on my capabilities and the weather forecast. If I trim too much and luff, I surf at nearly 30 knots so have to slow the pace to preserve the boat. It’s a delicate balance. I’m using 80% of the boat’s potential,” admits Boris, who like all the competitors was affected by Kevin Escoffier’s (PRB) misadventure. “I shared my feelings, let my emotions go by discussing it with my family,” saidBoris, “It helped me digest it all. We all realise how dangerous this race is and with that incident we came close to disaster”. Yesterday, Wednesday, morning, it was Sébastien Simon’s (Arkea Paprec) turn to hit an unidentified object which damaged his starboard foil. Later that day, British sailor Samantha Davies (Initiative Cœur) suffered a similar incident. Both have been forced to reduce speed and put their race on hold.

Such crisis situations are no stranger to Denis Horeau, at the head of the Vendée Globe in 1989, 2004, 2008 and 2012, and present on Zoom for the Yacht Club de Monaco’s update held every Wednesday afternoon. “I had a very clinical outlook and did not show myself to be affected when I had to manage complicated situations. But I always did it as a team. It’s the chain of skills of all those involved which helps resolve a situation. Fortunately, in Kevin’s case it involved two highly experienced sailors. I was totally blown away by what happened. It’s unheard of.” Next week, it’s Sébastien Josse’s turn to attend the update remotely. The sailor knows the Vendée Globe well having competed three times. In 2016, he was on the start aboard Mono60 Edmond de Rothschild which then became – Seaexplorer-Yacht Club de Monaco. Most of the fleet are now in the Roaring Forties which is living up to its reputation and name as the fleet faces a succession of depressions over the next ten days.