Wednesday 20th January 2021. They are coming back strong, closing in on Charlie Dalin (Apivia), current leader of this 9th edition. The Vendée first-timer is pushing his boat to the limit, despite problems with foils, and sailing as close as possible to the wind to reduce the distance separating him from Les Sables-d’Olonne.

Louis Burton (Bureau Vallée 2), once runner up in this mad climb up the Atlantic is pointing further west, 143 nautical miles away, while Boris Herrmann (Seaexplorer-Yacht Club de Monaco) representing the Principality of Monaco, is 114 nautical  miles from the leader, just ahead of  Thomas Ruyant (LinkedOut). 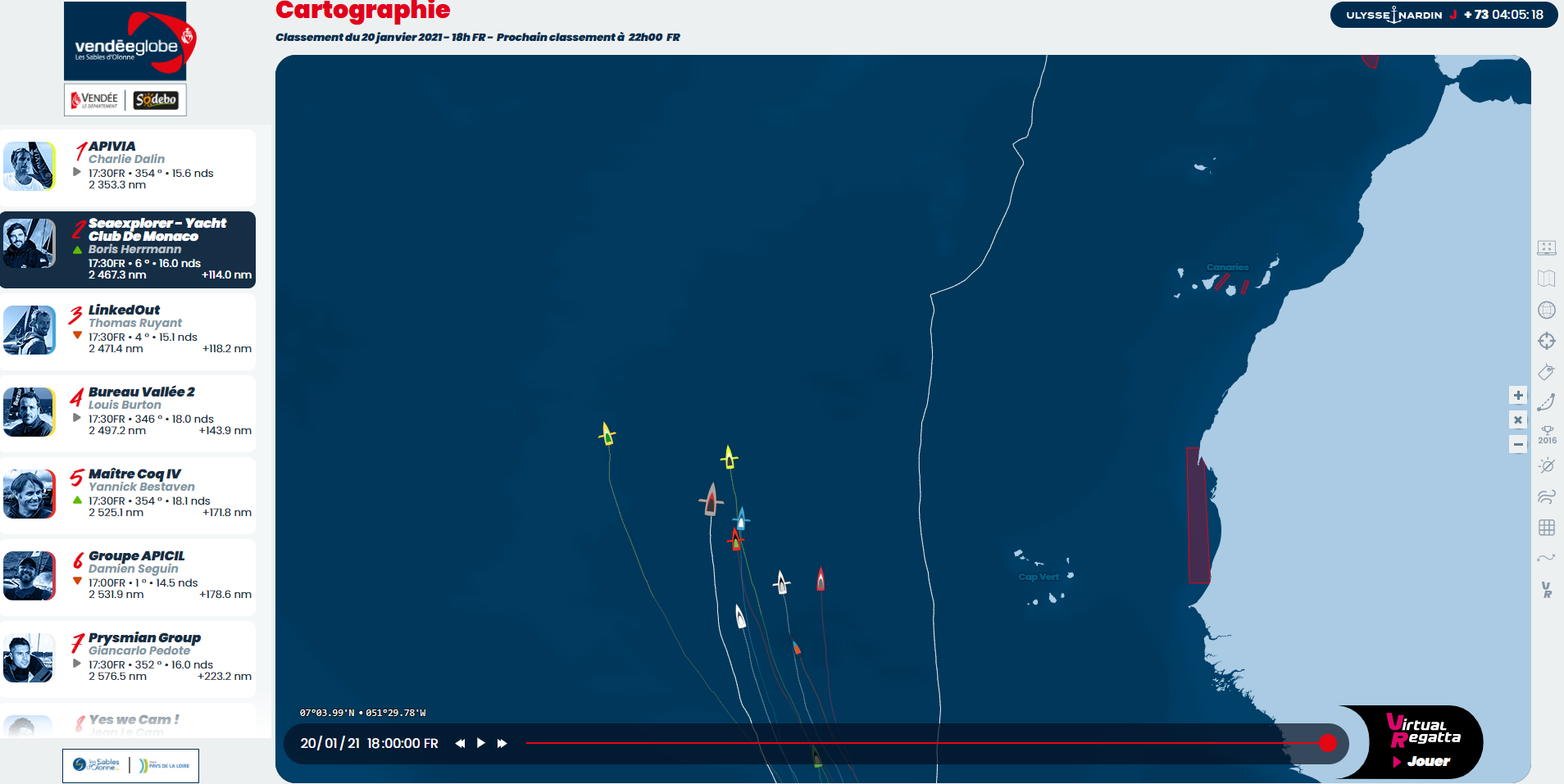 Still uncertain after 73 days of racing

They are sailing at full speed towards Vendée and Les Sables-d’Olonne. The men at the top in this Vendée Globe have those ashore hopping up and down with impatience, as indeed they are, eager to finish this race. Borne along by moderate north-easterly to easterly trade winds, the fleet is circumventing high pressures over the Azores. Charlie Dalin (Apivia) has opted for a shorter route to compensate for his malfunctioning port foils, as for Louis Burton (Bureau Vallée 2) he continues to bear away trying to go faster on a route further west. Their trajectories are different but their goal is the same.

“It’s going to be very competitive,” said Boris Herrmann (Seaexplorer-Yacht Club de Monaco). “We have to focus 100%, this is absolutely not the time to ease off the attention or the pressure as there is everything to play for”. The German skipper has a chance to be on the podium of this 9th edition and has one very significant advantage – a boat in almost perfect condition and two large foils ready to lift him out the water at full speed. The facts are there, for the first in this race he is in 2nd tanking along at 16 knots (as of Wednesday 20th January at 6.00pm).

The final verdict will not be known for a good week yet till the finish. An incredible scenario that Armel Le Cléac’h, winner of the last edition and guest of honour at the Yacht Club de Monaco’s Vendée Globe update, can but confirm.

“With every edition, a new chapter is written. When you see the scenario of these last few days, the suspense promises to be massive and it’s very difficult today to predict a potential winner. The future winner will be a great sailor but above all someone who has managed this race well with all its obstacles that still have to be overcome including a high pressure system over the Azores then a series of depressions to Les Sables-d’Olonne,” said the Vendée record holder (74 days 3 hours 35 minutes). “Of the pursuers, Charlie (Dalin) and Louis (Burton) have taken a small advantage but Boris and Thomas can still spoil the party for them. Boris is having a good race. He was conservative over the first half of the course. He made the wise decision not to attack with a boat which can go very fast. He’s played his hand well. He’s always been well placed. He has been discreet and knew how to be forgotten. We know now he has a boat that is at 100% of its potential and is comfortable when it’s windy.  We could have a non-Frenchman on the podium, so why not dream of victory.”

The first boats should reach dry land on a south-westerly flow, a point of sailing synonymous with gybes and the side effects that entails. The tactical battle that started when they exited the Doldrums is at its peak.